With 150 works, the exhibition puts the spotlight on the Lolland visual artist Ingemann Andersen (1929-2017). Andersen grew up in the countryside on Lolland, but moved to Copenhagen, where he studied at the art academy in the 1950s. In 1966 he was accommodated at the convent refuge San Cataldo on the Amalfi Coast.
It changed his life path because he met his future wife, the hostess of the place, and for the following three decades the couple therefore lived in southern Italy most of the year, while the winters were spent on Lolland.

Ingemann Andersen's depictions of people, architecture and nature unfolded especially in the woodcut, but also in painting, sculpture, drawing, watercolor and mosaic, and the main theme is the interaction between the flat homeland and the mountainous foreign, the sensed and the remembered.

Double vision accompanied by an exhibition book and audience-oriented activities. The book is sold in the museum shop, but you can also order it at post@fuglsangkunstmuseum.dk. It costs DKK 198 + a surcharge of DKK 75 for postage. 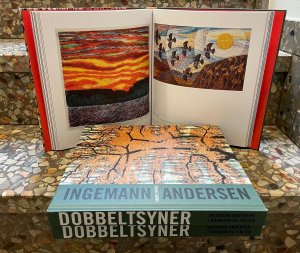 Curator: Tine Nielsen Fabienke. In collaboration with KunstCentret Silkeborg Bad og The Kastrupgård collection, which shows the exhibition after Fuglsang.

Kristeligt Dagblad “For my own part, I only had a peripheral sense of his art when the car rolled into the parking lot in front Fuglsang Kunstmuseum on Lolland. But when the visit was over, and I stepped into the water-cold winter reality, I felt both enriched and touched by this artist's inciting works ”, writes art critic Lisbeth Bonde (5 stars).

Lolland-Falster's Folketidende: “In 'Sol over Ravello' from 1993 in Italy and 'Sol over kornmark' from 2007 on Lolland, the almost divine sunlight is depicted largely the same in blue, yellow, orange and green colors. Which to that extent gives the term double vision meaning ', writes Hans Jørgen Møller (5 stars).

Børsen: "… dives into Andersen's 70 years of artistic production, where he especially unfolded superbly as a graphic artist in woodcut", writes the cultural editorial staff.

You will find Kunstavisen's review here (in Danish)