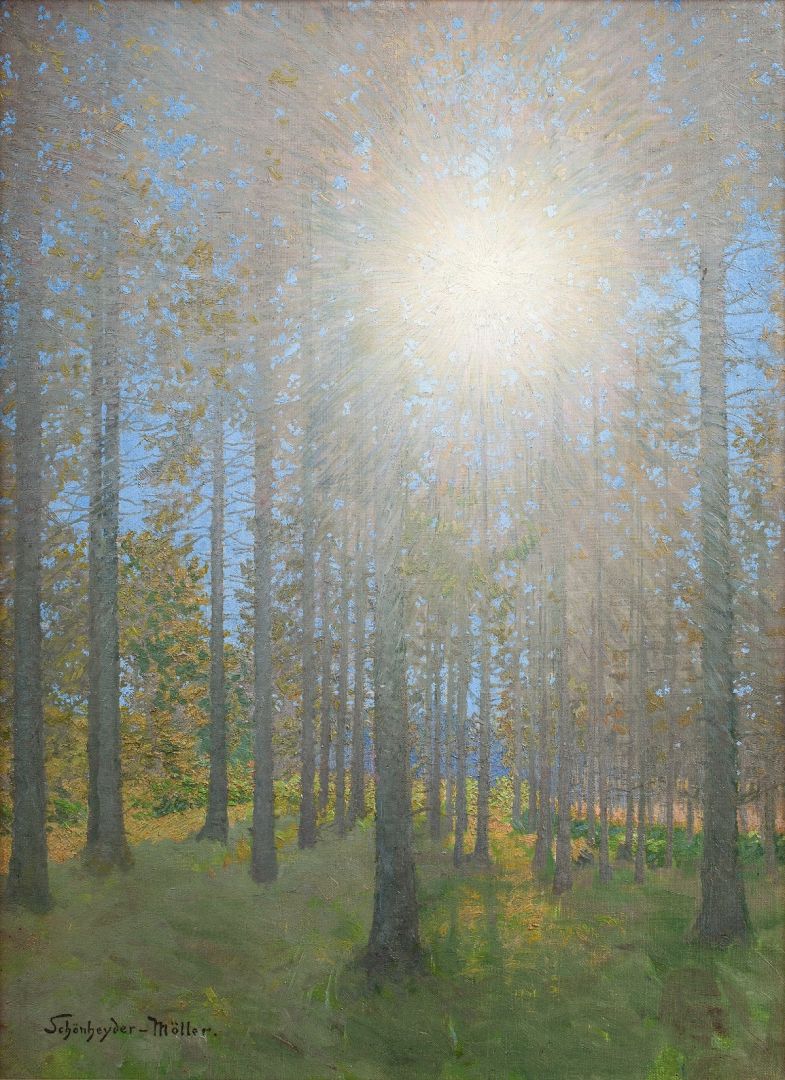 Quite literally a dazzling painter. But also a painter whose life became too short to get the attention he deserved. This is what curator Liza Kaaring says about Valdemar Schønheyder Møller, who at the end of the 1800th century went by the name “the sun painter”.

Why is Valdemar Schønheyder Møller a fantastic artist?

Because he paints dazzlingly good! He reproduces the light so vividly and powerfully that you get an experience of being physically dazzled. When else does it happen that you are dazzled by a painting?

The dazzling effect he evoked by studying the light in photographs. He was also a photographer. The painting here gives a sense of the sun as a life-giving force, both for our physique and for our mind. And an atmosphere of something mysterious and esoteric.

The motif with the sun seen in backlight through trees is a signature motif. He has painted many different variations of it. The picture here is painted in France, where he lived for a number of years. Because of the many paintings of the sun, he was called the painter of the sun.

Why is Valdemar Schønheyder Møller no better known than he is today?

“The main reason is probably that he did not manage to produce very many paintings. There are several reasons for this.

First, he spent a lot of time on photography. His photographs have great artistic quality, but photography was not recognized as real art at the time.

In addition, he died at just 41 years old. He was bipolar and was admitted to the Psychiatric Hospital in Risskov in Aarhus, shortly after he returned home from France. He died at the hospital in 1905.

The best paintings we know of, he painted in France. This is probably also a contributing reason why he did not get to mark his talent on the Danish art scene. Therefore, not much has been written about him in his own time. He also went under the radar of art historians for many years. ”

Why does he deserve to be better known?

His paintings are innovative and they are an important contribution to symbolism in the late 1800th century. A flow in which the outer world is used as an image of an inner state of mind. An obvious focus for him, who was plagued by mental illness.

At the same time, he also influenced one of the greatest artists in this country. Namely Vilhelm Hammershøi, with whom he was a close friend and collaborator. Both were preoccupied with light, but it's fun to see how differently they approached it. One painted gray weather and the other sunshine with full blast on.

Fortunately, the art world has recently opened its eyes to Valdemar Schønheyder Møller. Research has been done, books have been published and his works have been exhibited. Especially with a focus on the relationship with Hammershøi. ”

How can it be that Valdemar Schønheyder Møller's works are in Fuglsang's collection?

Fuglsang Kunstmuseum owns this one work by Valdemar Schønheyder Møller. The work was purchased as part of the museum's long-standing focus on landscape painting. That genre fills a lot in the collection, including landscapes from the decades around the year 1900. This applies to symbolist works by, for example, LA Ring and Vilhelm Hammershøi. With the acquisition of this painting, the museum has also given one of the otherwise overlooked artists of landscape painting its rightful place.

Liza Kaaring is an art historian and museum inspector Fuglsang Kunstmuseum. Here she has special responsibility for the museum's research. Photo: Ingrid Riis.