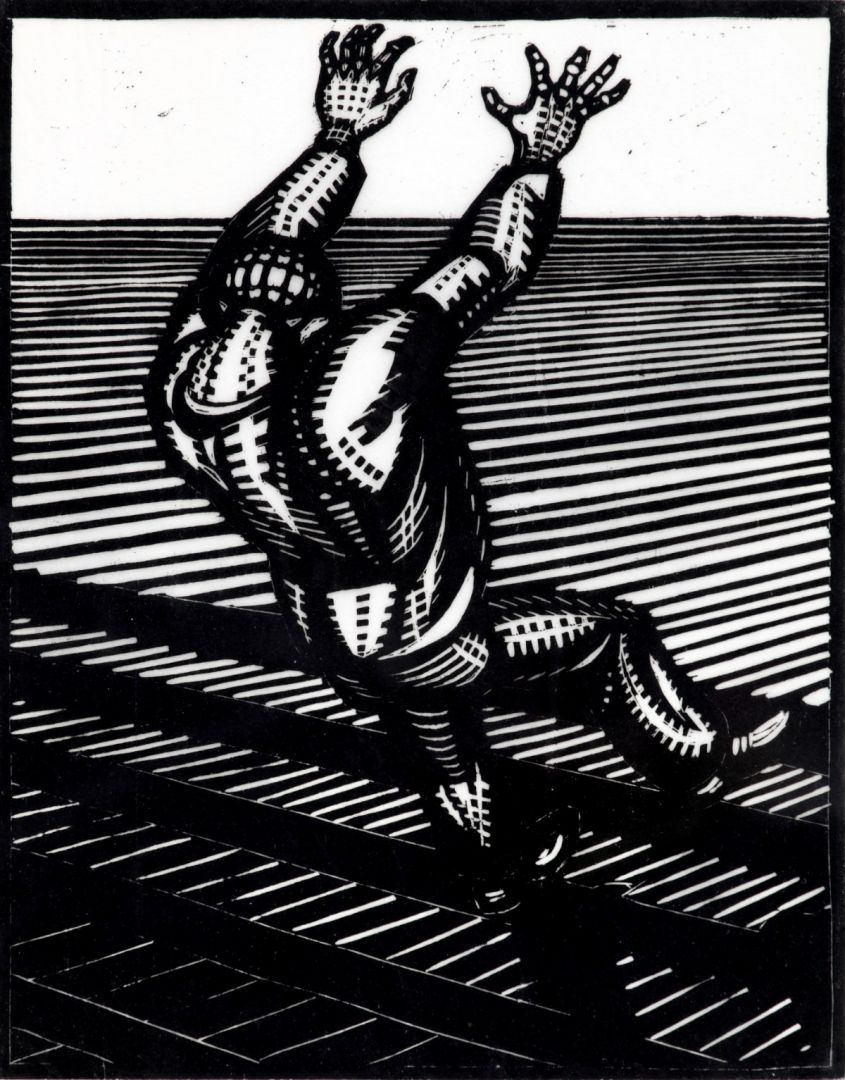 One of the museum's art historians, curator Liza Kaaring, tells here about the work of art that was created in the shadow of the Cold War. And about why the artist Palle Nielsen was so preoccupied with people falling.

Why is the artwork here so remarkable?

First of all, it is an extremely effective image because the motif is so simple and at the same time so dramatic. The narrative around is peeled away. There are no explanations. Nothing before and after the fall. We only see the dramatic moment itself.

In addition, it is an unusually large linoleum cut. It is three times as large as the others in the same series, Orpheus and Eurydice. The series that in 1959 became Palle Nielsen's breakthrough as an artist.

There is no doubt that it is one of the main works in the museum's large collection of graphic art.

What does Palle Nielsen want with the artwork?

Palle Nielsen was very preoccupied with falling people. To him, it was a metaphor or a symbol of the fall of humanity.

He wants to express his great concern about the Cold War that begins in the wake of World War II. He was very disappointed that world leaders had not understood that they had to stop waging war.

In his art, we see falling people in many places. Spontaneous, unprovoked falls. In the middle of the street, down from rooftops, out windows. It is mysterious and unexplained why they are falling.

Palle Nielsen was not alone in taking an interest in humanity. In general, many in his time were preoccupied with the idea of ​​the human.

Philosophers, artists, writers and many others asked themselves and each other whether man was really a good being. They had just experienced the most bestial aspects of humanity during World War II, so they doubted the good in man.

Palle Nielsen became part of a group of artists we today call 'The Man Painters'. They stood for a new form of realism in art and took an interest in human vulnerability.

Everyone understood the message as several of his fall motifs from the series Orpheus and Eurydice was exhibited in the late 1950s. Most shared Palle Nielsen's concerns.

One of the most fascinating things about his technique is the numerous, different patterns that hide in his hatches. The shadings shape the motif by forming a shadow and making it look three-dimensional.

It is a linoleum cut, which means that he first cut the motif into linoleum. The motif is revealed by removing what should be white. Then ink comes on the rest. That is what has become black.

1.The weight of the falling man's body. It makes him real and present. You can almost feel him.

2.The way the man grabs out into the empty air. It emphasizes that he is alone and desperate.

3.Notice the many diagonal lines that cut through the image surface in different directions. They help to create instability and movement in the image. You have no doubt that the man has lost his footing.

Liza Kaaring is an art historian and museum inspector Fuglsang Kunstmuseum. Here she has special responsibility for the museum's research. Photo by Ingrid Riis.