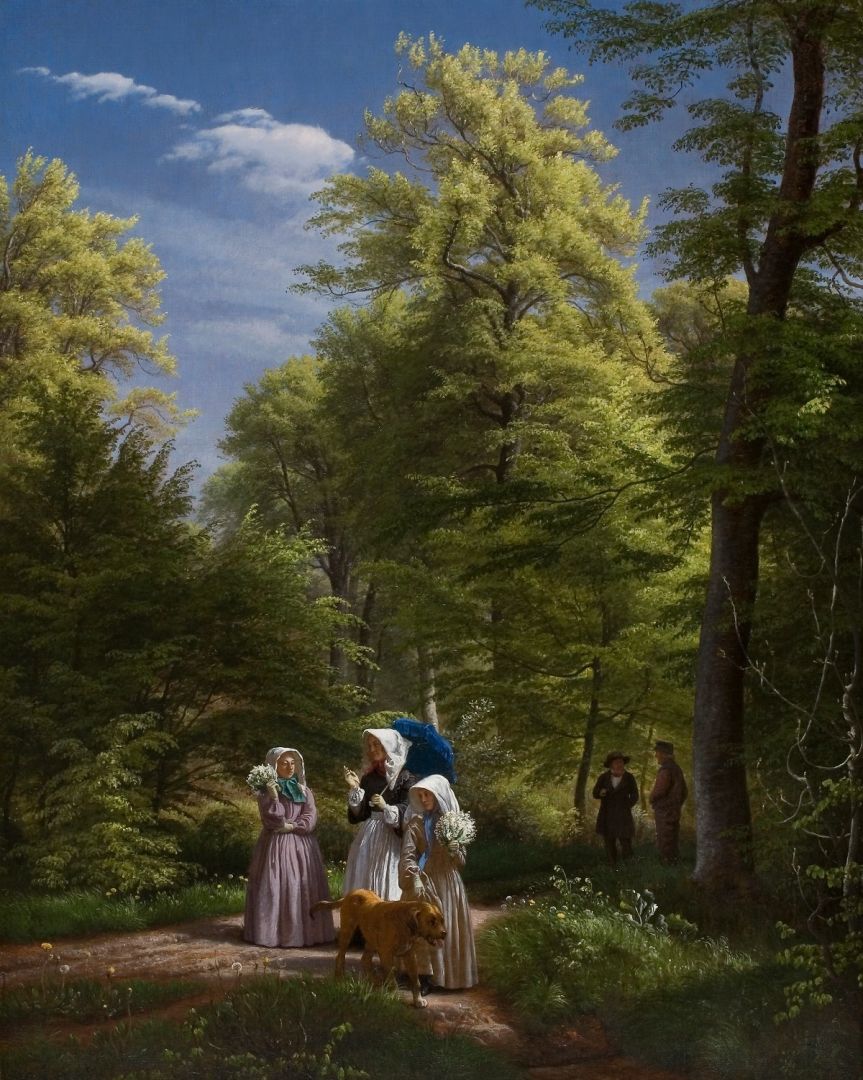 It is just before we can hear the stanzas "There is a lovely country, it stands with wide beeches". The beech tree plays the main role in View of Iselingen Skov. And the tree is a symbol of Denmark just like in the national anthem.

The painting was created during the period when Denmark took shape as the democratic nation-state we know today. And at the same time as the beech became a fixture in the Danish forests.

Hear how the beech forest and the nation state are connected when art historian and researcher Susanne Bangert gives an introduction to PC Skovgaard's spring green painting.

“Today it is a painting that is often used to show what Denmark is and what is particularly Danish.

Some may think it looks familiar. This is because it is a later variant of the known A Beech Wood in May near Iselingen Manor, Zealand from 1857, belonging to the Statens Museum for Kunst. Both paintings depict the forest at the manor Iselingen in South Zealand.

The painting here, View of Iselingen Skov, was commissioned by one of Skovgaard's acquaintances from the National Liberal milieu, Augusta Marie Hall, married to politician and council president CC Hall. She had been a foster child at Iselingen Estate and wanted a picture reminiscent of Bøgeskov in May.

The painting shows PC Skovgaard's strengths as an artist with the beautiful depiction of nature. But it also expresses a political stance towards the autocratic king who ruled the country at the time. "

What does PC Skovgaard want with the artwork?

“PC Skovgaard had first and foremost been given the task of depicting the client Augusta Marie Hall's childhood memories. He knows her and knows that she and her political background want Denmark to be a democratic nation-state instead of being ruled by an autocratic king. It is a clear political message that PC Skovgaard sympathizes with and that he paints.

We can see this because the beech forest at this time was a widespread symbol of the new, Danish nation-state.

The mission had actually succeeded in 1849 when the Constitution was introduced. But when Skovgaard painted the picture in 1861, there were parliamentary elections.

Therefore, it is perhaps not so strange that the picture also hides a point about perpetuating the nascent national and democratic values. Skovgaard points to this point with the three young women in the foreground. The tallest and oldest of them narrates with a slightly instructive hand while the others listen. It's not small talk, but something important she wants to say.

And in front of them the path divides. It involves a choice that women will have to make. It does not matter which.

In fact, the result of the 1861 general election was that the National Liberals made enormous progress. "

“The painting testifies to the movement that meant that Denmark today is a democratic nation state, where our land area corresponds with our language area. A movement that was taking place in many places in Europe at this time.

And then the painting also testifies to how significant a symbol the beech forest was. 100 years before the painting here was painted, there were no beech forests in Denmark as we know them today.

There was a shortage of timber in the country, and the beech forests therefore came to play an important role. The beech began to grow well as the landowners introduced a new form of forestry and began to drain.

This also applied to Iselingen Estate, which was owned by Holger Halling Aagaard. He is one of the two men you can see in the background. "

“PC Skovgaard's work process was reminiscent of some of the scientific methods that had just emerged here in the 1800th century.

Like geologists, botanists and zoologists, he studied his subject in depth. In this case flowers, plants, trees and other plants. And the painting is so built up of the many, many sketches that came out of it. ”

1.“The plants in the foreground are a good example of how lifelike PC Skovgaard worked with the motif. They actually look like the plants that would grow in that place at that time of year. ”

2.“The incidence of light around the image creates a fantastic effect of depth and spaciousness. For example, the light that falls from the right side and onto the treetops and the women's kisses. ”

3.“The bare branches on the right side, which is an oak that has gone out. It is a strong signal of the artist's view of autocracy, as the oak tree was the symbol of the king. ”