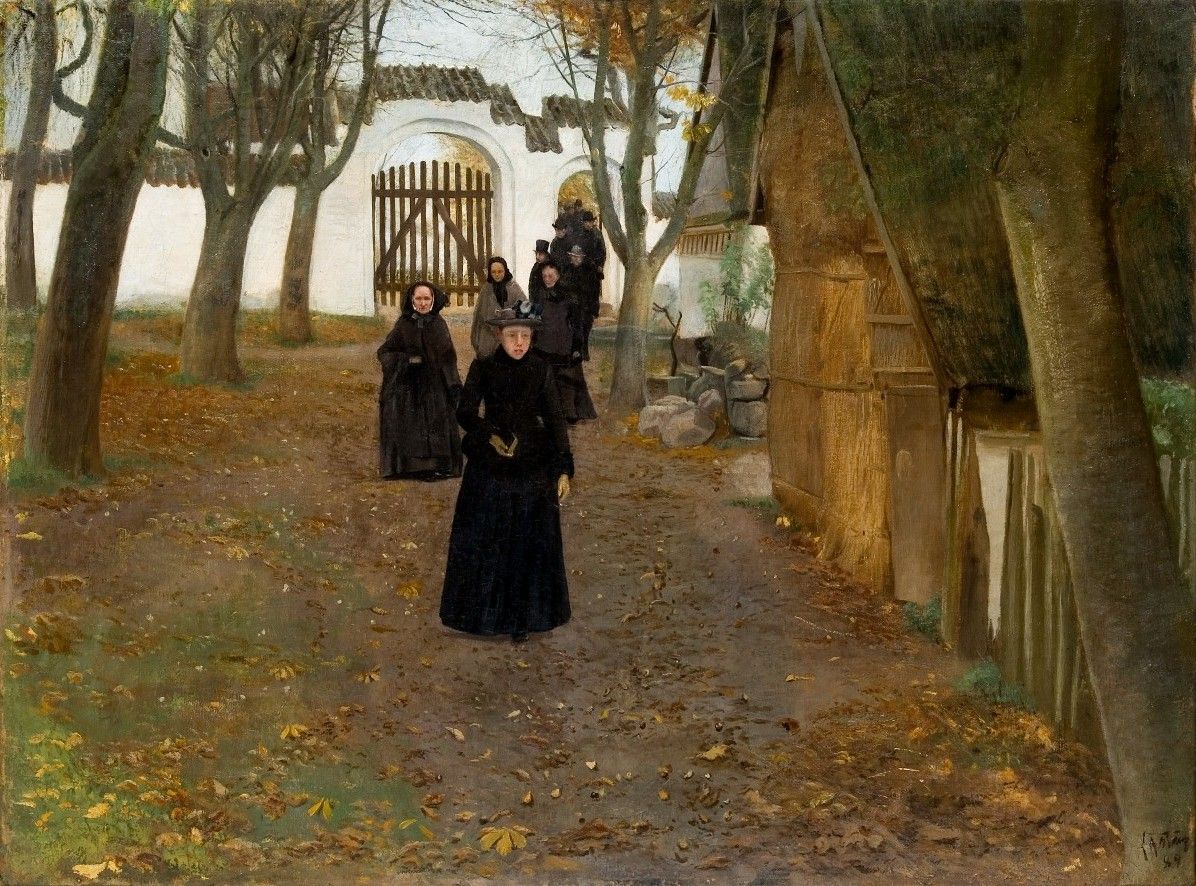 A young woman holds her hymnal in her right hand. She walks cautiously across the cold, gray-brown ground.

You might imagine the sound of church bells in the distance. Behind the solid white wall with the gate closed. From where a retinue of black-clad wander out.

It is incredibly accomplished. The gray-brown colors and the loneliness among the churchgoers go up into a higher unity and create a deep, oppressive atmosphere. So the remarkable thing is LA Ring's ability to portray the melancholy so uniquely and thoroughly.

What would LA Ring do with the artwork?

There is no doubt that this is a picture of Ring's atheism. LA Ring did not believe that the church could provide salvation. He indicates this by saying that the church itself is not included at all, but only the wall around it. And the door is even closed. He thus signals his own resistance to going in there.

LA Ring focuses on the people who have just visited the church. And on what the church does for them. This is clearly not a positive thing. They walk isolated and alone in a row. And this despite the fact that they have just had a common experience in the church, which could have created cohesion between them.

It is a good example of the art of modern breakthrough in the latter half of the 1800th century. It was a time when more and more people began to believe in science and the new technology rather than God and the church. This also applied to the LA Ring.

But it was also a difficult transition when the old, fixed notions disappeared. Ring was very depressed at this point. He was poor, unhappily in love with his friend's wife, and his brother had died a few years earlier. And he could not seek comfort in the faith either. So life seemed meaningless. He felt alienated from the world. And you can clearly sense that mood.

So the Bible was replaced by the British naturalist Charles Darwin's theory of evolution, but it might not completely fill the place for him.

It is typical of Ring that he first painted the surroundings in the background and then afterwards the figures on top. It gives a special effect because the figures come to resemble silhouettes. They appear disconnected from their surroundings. And that underscores the feeling of being a stranger in the world.

1. That we do not see the church, but only the wall and the closed gate. As a man of the modern breakthrough, LA Ring is clearly writing off the Christian faith in that way.

2. Notice how much earth fills the picture. It is typical Ring that the horizon is high, so the sky fills very little, and the earth fills incredibly much. The explanation is that it is the earthly life that is important in Ring's optics. He grew up in the countryside, where one was deeply dependent on the earth, nature and its resources.

3. The withered leaves and the gray-brown colors enhance the oppressive mood in the painting. LA Ring preferred the transitions of the seasons, such as fall. On the one hand, he liked the colors, and on the other hand, he could use them as images of the transitions of life.

Liza Kaaring is an art historian and museum inspector Fuglsang Kunstmuseum. Here she has special responsibility for the museum's research. Photo by Ingrid Riis.