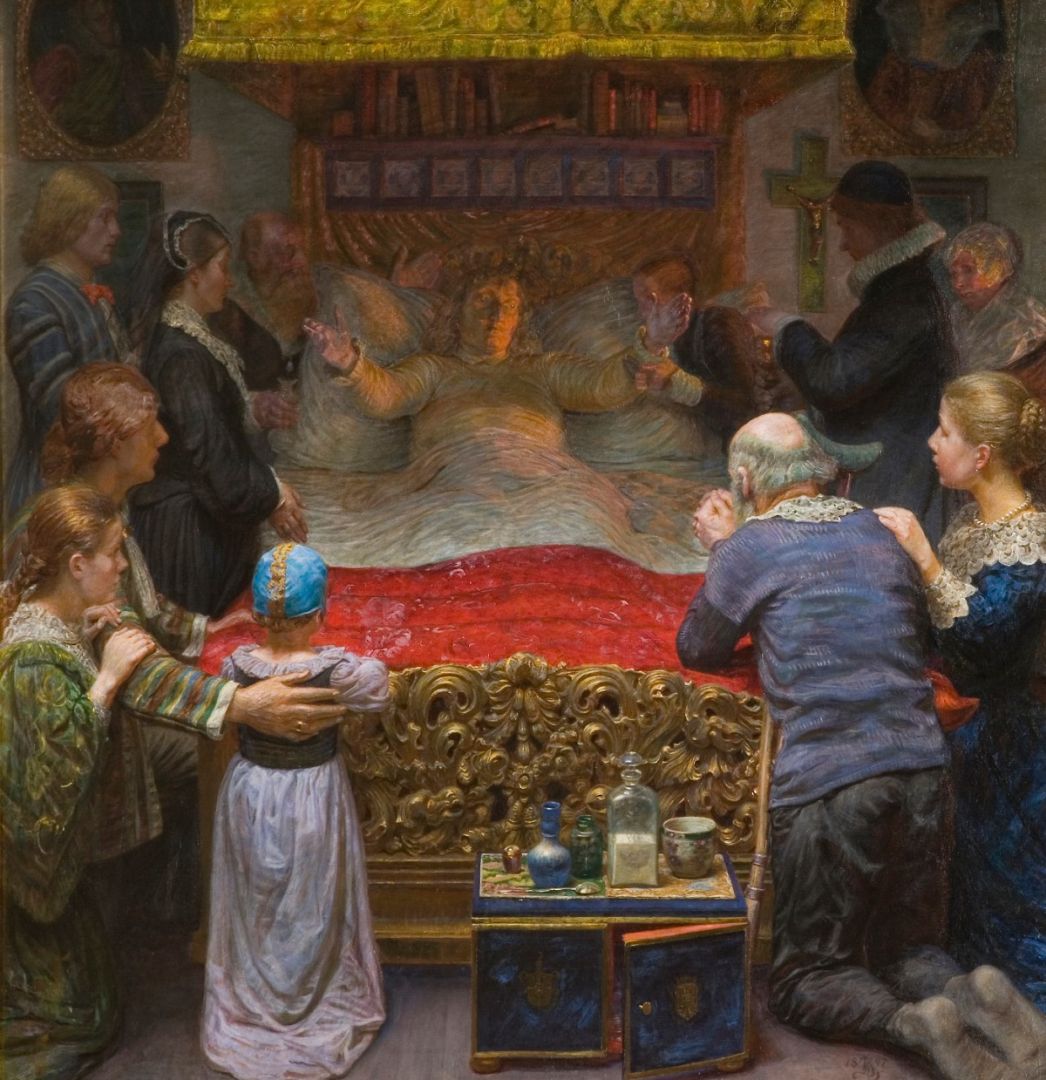 'The Deasth of Leonora Christina in Maribo Kloster'

If you were lucky enough to get past Kristian Zahrtmann's studio in 1897, it would be like stepping into a kloster 200 years earlier. Despite often depicting a bygone era, he never painted out of free imagination.

You would see the gilded headboard. The low blue cupboard with glass bottles and jars. The red silk blanket on the bed.

And the models. Men and women in historical costumes. And the lady in bed raising her arms to the sky. Her who should imagine being none other than Christian 4.'s daughter.

Find out why she played such a big role when one of the museum's art historians, Fleur Wetterholm, talks about the painting. The Death of Leonora Christina in Maribo Kloster.

Why is this painting so remarkable?
It is a powerful painting made by an original artist that cannot be put in boxes. Kristian Zahrtmann is not reminiscent of other Danish artists of his time.

The painting shows his great storytelling art. He has chosen to paint an extremely important moment in Leonora Christina's life. The serenity that surrounds the dying Leonora Christina radiates with great force from her. The calm is liberating and contrasts with the mourners around her.

It is an incredibly well-chosen moment because you feel like knowing more. Both about the story of the dying woman and about what is going to happen next.

What did Kristian Zahrtmann want with the artwork?

Zahrtmann is in his mid-50s when he paints the picture of Leonora Christina's death in Maribo Kloster. So it is possible that he has begun to think about death and what death he himself hopes to have.

Because of the calmness that is in her charisma and gestures, it seems that Zahrtmann sees death as a liberation.

Leonora Christina was a historical figure in whom Zahrtmann recognized himself. He painted 20 paintings of her during his lifetime.

She was the daughter of Christian IV and was in prison for 4 years because her husband, Corfitz Ulfeldt, had committed treason. But she did not get a verdict herself. Zahrtmann believed she was being treated unfairly and had to undergo much undeserved suffering.

He would give Leonora Christina redress for the unfair treatment. She became his alter ego and invisible companion. In fact, she came to mean so much to him that he made sure she came to adorn his tombstone.

When Leonora Christina was released from prison, she came to live at Maribo Kloster until her death. The scene in the painting must therefore imagine taking place in the kloster.

The special thing about Zahrtmann is that he is one big exception from his own time. For example, time dictated young, adorable female characters, but his women are strong and often corpulent.

He was in a way ahead of his time. An individualist who balanced on a knife edge.

On the one hand, he was held and popular. On the other hand, he did not care about the norms of fashion and society. His depictions of men and women challenged society's expectations of what a real man and a real woman should look like. Expectations that we still discuss today. Leonora Christina, for example, always appears as a slightly manly figure.

He cultivated his own personal style. And he also passed on that ambition to the next generation of artists who teach at Kunstnernes Frie Studieskoler.

It is interesting that you can divide the picture into two halves. He uses quite different techniques in each part.

It makes the dying Leonora appear supernatural. As if she already belongs to a world other than the lower part of the image that belongs to the earthly world.

1. The light that falls on Leonora Christina adds a divine glow to the image. It gives the feeling that in this moment she is completely surrendering to God.

2. The closet at the end of the bed hides a hidden symbolism. The closed and open door refers to the passage between life and death.

3. The textiles, which are eminently well painted. For example, notice the fine silk fabrics. One of Zahrtmann's major interests was textiles. When he was abroad, he got his mother to send textiles that he could paint.