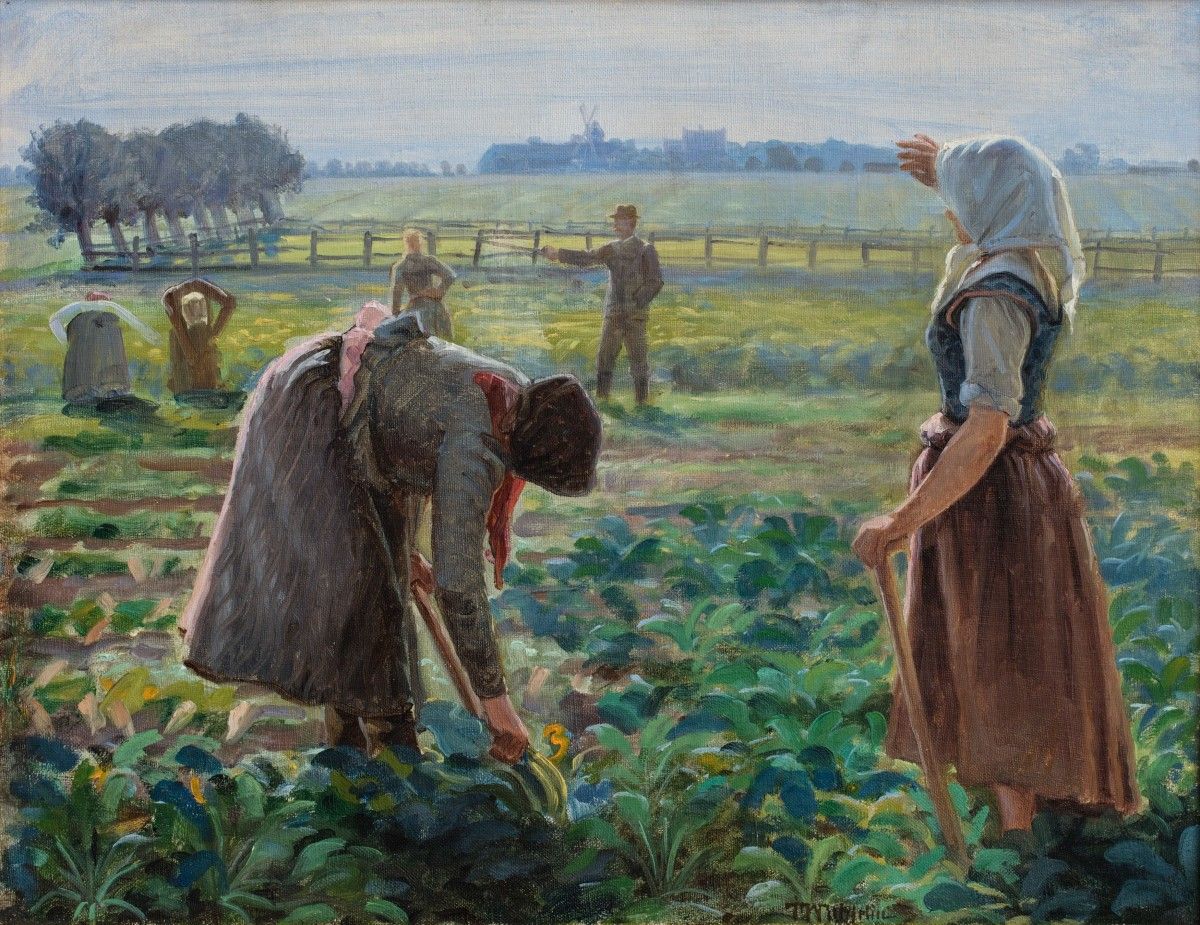 'Polish Seasonal Workers in the Field at Øllingsøe, Lolland'

Johannes Wilhjelm belonged to the second generation of Skagen painters, and he took his childhood in the country out into the world. Where others painted the vibrant city life, he preferred to describe how man belongs to nature. A talent who preferred to adjust to the traditions rather than revolutionize them, says curator Tine Fabienke Nielsen.

Why is Johannes Wilhjelm a fantastic artist?

“Johannes Wilhjelm is interesting because he took his background in the countryside on Lolland with him to Italy, Jutland and France. Together with many other European artists, he sought the unspoiled life in pristine outlying areas.

Throughout his life, Wilhjelm portrayed the connection between man and nature that he had experienced in his childhood and rediscovered on his many journeys. He grew up as a landowner's son on the Lolland manor Øllingsøe, where he painted everyday life in the countryside at the beginning of the 1900th century. For example, a group of Polish seasonal workers, as we see in the painting here.

Here he pays homage to the cultivated landscape and the hard-working imported labor. The colors are juicy green, and the woman in the foreground on the right is probably more well-turned than the average beetle. The workers' feet are also hidden in the field, and it almost looks like they are growing up from the Lolland beet adventure. It all emphasizes fertility and cohesion with nature. That the earth is the basis of human life.

But it is not pure idyll. For the picture of country life is also unsentimental. For example, there is a caretaker in the middle of the picture who, with his cane, dogs the workers. So Wilhjelm still had an eye for social conditions and for his own family's privileges. ”

Why is Johannes Wilhjelm no better known than he is today?

“Wilhjelm did not fit into any of the landslides of art that happened during his time. He was born between two generations of visual artists who shifted traditions and norms: the modern breakthroughs of the 1880s and the early modernists of the 1910s.

Wilhjelm was not revolutionary. He took as his starting point the traditional figure painting and landscape painting, which he knew from teaching at the Academy of Fine Arts in Copenhagen. Afterwards, he went to the Artists' Study School, where he learned new things about light and color. But he did not become a frontrunner for radical experiments with form and content.

Wilhjelm also stood in the shadow of the big names of the artist colonies. For decades he was part of a small colony around Svinkløv in North Jutland. He did not come to Skagen until 1909, and at that time Anna and Michael Ancher, Krøyer and the rest of their generation had long ago founded the myth of the Skagen painters. And the next generation of painters in Skagen, of which Wilhjelm became a part, was never allowed to make the same impression as his predecessors.

So Wilhjelm came too late to become a "real" Skagen painter and too early to join the modernist wave. "

Why does Johannes Wilhjelm deserve to be better known?

“First and foremost because he so beautifully depicts the relationship between man and nature. And with his pictures of foreign workers in the beet field, we see a very important part of Lolland culture and Danish agricultural history.

Wilhjelm represents the many, many artists who were popular in their own time, but whom we no longer hear about. Because they did not revolutionize the art scene, but quietly work on the traditions. In addition, he also makes a rare connection between Lolland and the artist colony in Skagen. ”

How can it be that Johannes Wilhjelm's works are in Fuglsang's collection?

Johannes Wilhjelm is among the artists in Fuglsang Kunstmuseums collection, born on Lolland and painted from here. The museum has only three paintings by him, but they present in return three essential parts of his life and work: Growing up on Lolland, the marriage to a Norwegian woman and the great love affair in the area around Svinkløv. The Skagen motifs can be found in the Skagen Art Museum's collection.