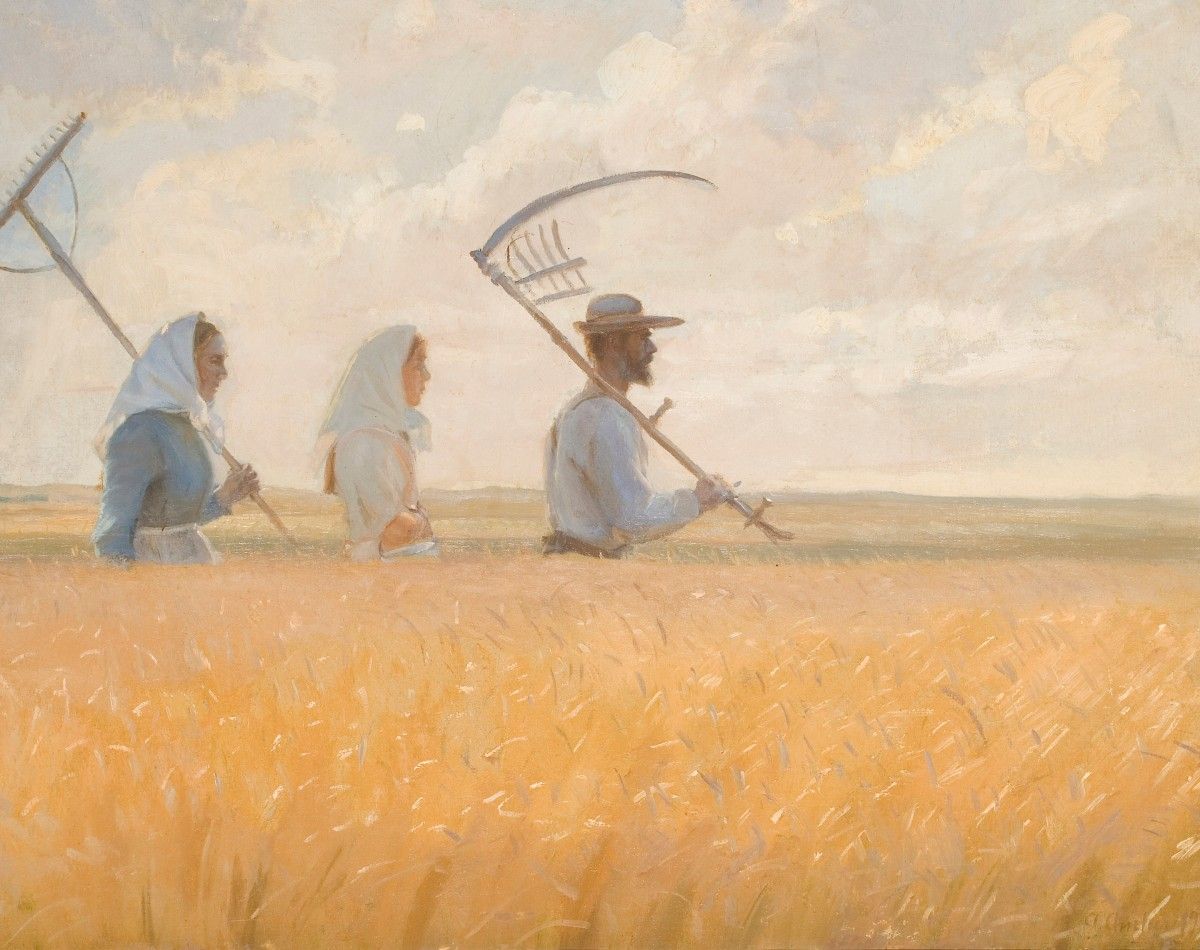 A procession of three harvest workers trot through the cornfield. The sun casts its bright light on them. A woman with a rake, a girl with a bucket and a man with a scythe.

Anna Ancher's autumn scene is a sunny monument to the farmers in Skagen. Museum curator Tine Nielsen Fabienke talks here about the painting, which is about both life and death.

“Anna Ancher is one of the best known Danish artists. Among other things, because her painting style was one of the most innovative of her generation. And therefore she became an important predecessor of later modernist artists.

The painting is both typical and atypical of her.

This is typically due to the extremely tight composition that occurs when the image is divided across into two halves. Sky and field. Slightly offset from the center, we have the three harvest workers who almost form a frieze. So we have some incredibly stringent horizontal and vertical lines in the painting.

But at the same time, it is atypical for her that the scene takes place outdoors and not indoors in the home, which is otherwise her favorite motif. ”

What did Anna Ancher want with the artwork?

“Very typical Anna Ancher, so the scene at first glance shows everyday life in Skagen. It is immediately a tribute to the peasantry and the manual, hard work they perform.

But even though it looks mundane, there is also a deeper layer. It’s is hard not to think of the Grim Reaper. And autumn as a symbol of the life cycle.

The man's facial features are shaded and therefore almost whispered out. That way, he becomes a general image of a harvest worker, because in principle he can be any farmer. And when he has at the same time got a scythe in his hand, then we easily come to see him as a symbol of death.

Likewise, the harvest-ripe grain and the different ages of the three persons are a picture of the life cycle. The grain is harvested to give new life. Death and life replace each other. ”

“Anna Ancher was part of the famous group of artists we call the Skagen painters.

She was the only one of them who was born in Skagen. The other artists went to Skagen in the latter part of the 1800th century. Partly because of the light. But also because many wanted to experience a more unspoiled and simple life than what was found in the cities. It had become noisy, hectic and dirty after the industrial factories had moved in.

But when Anna Ancher painted the picture at the turn of the century, Skagen had already changed a lot. It was well on its way to becoming the tourist magnet we know today. ”

“She is clearly influenced by the French Impressionists, whom she got to know during her study stays and travels to Paris.

Impressionism is the art of suggestion. For example, she creates an entire cornfield using only a few very short, scattered brushstrokes. The clouds are conversely formed using coarse, wild coats with thicker paint.

We also see the tight composition in the Impressionists, who were inspired by Japanese woodcuts, among other things. ”

1.“Their facial features are blurred. It says something about it not being meant as a portrait of some specific farmers, but a picture of all the harvest workers. With a touch of the man with the leen leading the way. ”

2.“The tear on the left side. It provides a marked diagonal movement forward from left to right. In this way, it emphasizes the progress of the three people across the field. At the same time, cropping gives a snapshot effect inspired by the photograph. At this time, it was popular with painters to use photographs as part of their work process. ”

3.“The grain. Notice how Anna Ancher with quite a few strokes and highlights manages to evoke thousands of axes and gives movement and life to an entire surface ”