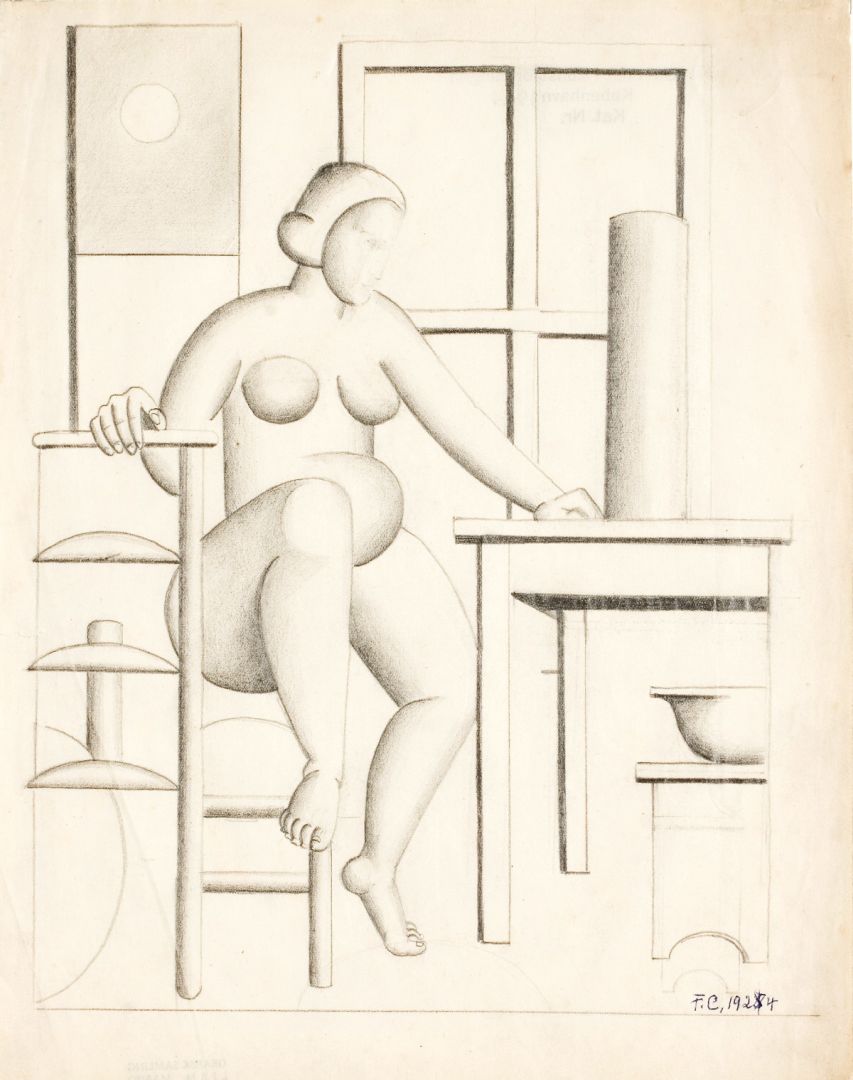 Franciska Clausen sits with paper and pencil and studies a female model at an art school in 1920s Paris.

She's in her mid twenties. As the only Dane, she is well on her way to becoming one of the prominent students of the father of machine aesthetics, the famous French artist Fernand Léger.

Here in his studio, she does not know that the drawing in front of her will be bought by a Danish art museum 40 years later. Only at that time does she achieve the Danish recognition she has today.

Here, one of the museum's experts, Tine Nielsen Fabienke, talks about the artist who was part of the international avant - garde's front line.

Why is this drawing so remarkable?

“Franciska Clausen fills a special place in the history of Danish art. She was among the few Danes who gained a recognized role in the international avant-garde environment in Paris in the 1920s.

The drawing testifies to the talent she developed down there. It has some incredibly fine qualities.

On the one hand, it is very rigorous in its design language. On the other hand, there is also a touch of something sensitive and delicate about the model, which contrasts with the streamlined and geometric interior. For example, it is a bit touching, such as her elephant-like fingers and toes are drawn in detail. And the slightly turned-away head also expresses something embarrassing and gentle. ”

What did Franciska Clausen want with the artwork?

“The drawing here dates from the beginning of her studies with the artist Fernand Léger, where she is in the process of further developing the abilities she later becomes known for.

In the past, she has drawn more naturalistically, for example, traditional model studies. But here she is practicing drawing in a different way. And so it turns into some rather progressive experiments with shape, surface and lines.

She learns from Fernand Léger's design language, which is inspired by the aesthetics of the machine. Through him she also gets a glimpse of contrasts. For example, between the straight and the curved, which is very clear here. ”

What does the drawing tell us about the time it was created?

“Here in 1924, Paris has been the epicenter of the development of art for 50 years. Ever since Claude Monet and his colleagues revolutionized art with their impressionism in the latter half of the 1800th century.

But Franciska Clausen's teacher, Fernand Léger, wants to do away with the principles of the Impressionists. The Impressionists wanted to describe their impressions in isolated moments. For example, the play of light on the water or the movement of a crowd on the street.

Those kinds of moments from everyday life are a flattening of art, Léger believes. Art must be more exalted and timeless. Therefore, he and other artists are interested in geometry and simplification.

The drawing also shows the movement towards the more general and exalted. You can see it in the way Franciska Clausen has whispered the woman's face out. It removes her personality so that she is not a particular woman but can be the image of all women.

But despite the fact that Franciska Clausen was part of the vanguard in this international circle, she was actually only really recognized as an avant-garde artist in Denmark when she was in her sixties. It was at that time that the museum bought this drawing from her youth. ”

“She masters a very resilient expression in the composition. She creates this with the help of the contrast between the soft shapes and the geometric.

Her shading technique is absolutely crucial here. The soft shapes of the model have light shadows shaded with a soft pencil. You can barely see the pencil lines. In contrast, we have the very hard, almost black shadows. For example, under the table and on the window in the background. ”

1.“The model's face has been whispered out. It is an attempt to make her an object in line with the others in the lineup. Or to make her a general image of a woman rather than a specific individual. ”

2.“The nails on hands and feet. Franciska Clausen has maintained a human trait by drawing nails. It's weird that that detail should be included when everything else is peeled away. We can see the same feature at Léger ”.

3.“The highlight on the knee and the shadow around it. It is a fine detail that plays with the circular shape of the stomach. ”