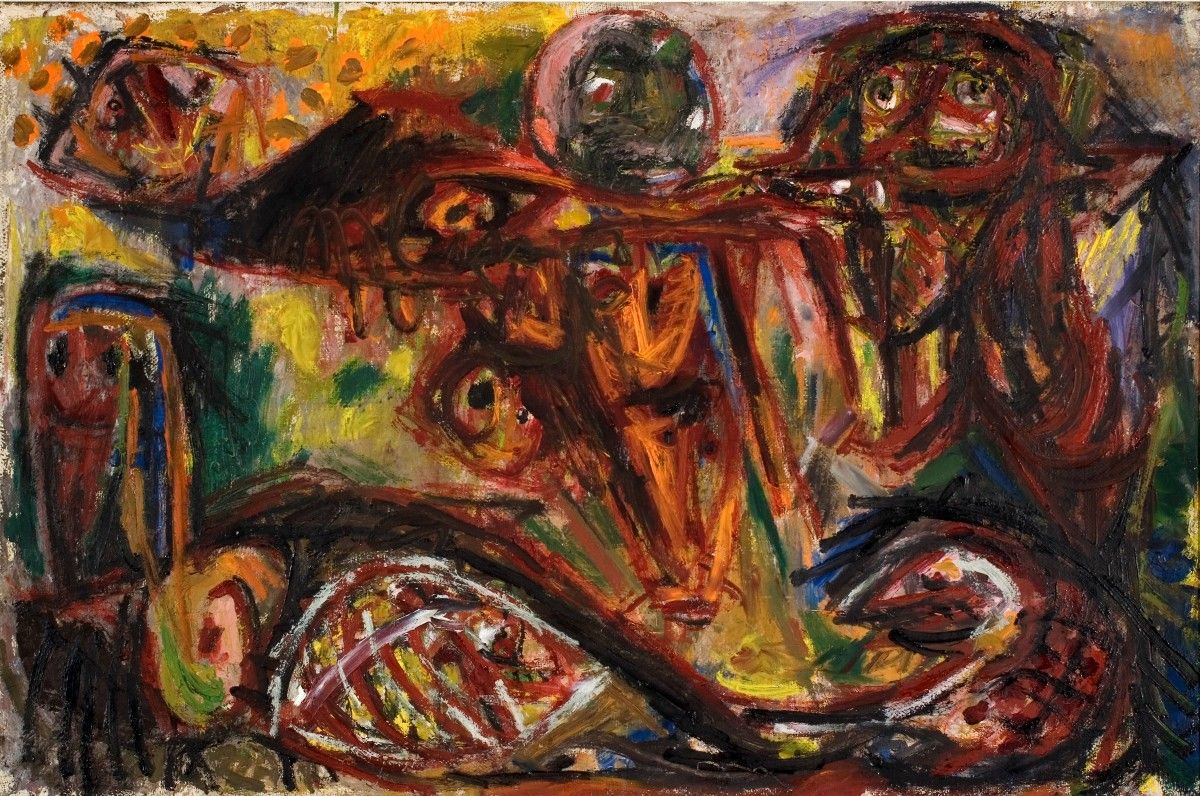 Three figures with wide eyes appear in a morass of red, black and brown. Beneath them, white brushstrokes draw the contours of a figure resting.

Asger Jorn painted Those Left Behind five years after World War II ended. But the Cold War cast a massive shadow over peace. He was afraid it would all happen again.

It shows Asger Jorn's amazing ability to concentrate a powerful energy in a painting. We can see teeth, puffy eyes and something resembling skeletons and dangerous masks.

Although we can not see exactly what is going on, the picture gives the impression that it is serious. Maybe the feeling of having lost someone after being at war.

Asger Jorn is one of the most famous Danish artists of the 1900th century. After his death, the art world proclaimed Jorn to be the greatest Scandinavian artist after Edvard Munch.

The picture comes from his Cobra period, which lasted only a few years from 1948 to 1951. He is especially famous for being one of the co-founders of the international Cobra movement.

What did Asger Jorn want with the artwork?

“Together with the other Cobra artists, he tried to free himself from the traditions of Western art. The West had collapsed during the war a few years earlier, so much of what the traditions were based on no longer made sense to them.

Instead, for example, he was inspired by art from Africa, South America and the East. Or of ancient art, medieval frescoes, children's drawings and the art of the mentally ill.

He would try to find an underlying primordial force in the language of form. Something original. Something that all people would be able to relate to, no matter where they came from or how rich or poor they were. ”

The picture testifies to the widespread fear of a new war that prevailed at this time shortly after World War II. Many were afraid that it would all explode again.

Jorn himself was afraid of a new war and suffered from anxiety during this period. The painting is linked to a larger series of pictures with the title Visions of war. Here he tried to express emotions such as anxiety, powerlessness, sadness and anger.

It may sound strange, but it plays a huge role that you can so clearly see that paint has been used. That one can see his movements quite openly in the brushstrokes. He deliberately refrains from hiding the process and the material from which the artwork is made.

The wild and spontaneous technique also means that some believe a five-year-old could have painted it. But Jorn would have taken that as a praise.

For if, as an adult, he could create an expression like a five-year-old, then he would have hit a universal and unspoiled imagery that was for all people. A language that might inspire those who experience the works to become more creative.

1. Notice the curved figure at the bottom of the picture. Is it a dragon or a dead person with bare ribs? The characters are constantly changing. I find that I am constantly negotiating with myself about what I see.

2. Look in the top left corner how he has carelessly dabbed the paint on. It shows a spontaneous process that he does not mind that we can see through.

3. The three mesh-like figures at the top of the painting are a good example of the Cobra style. They are typically inspired by the art of children and the mentally ill or masks and figures that Jorn had seen in ethnographic museums. They give a restless and mysterious atmosphere.